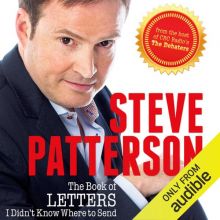 The Book of Letters I Didn't Know Where to Send , Hörbuch, Digital, 1, 332min

Steve Patterson's The Book of Letters I Didn't Know Where to Send is a collection of - wait for it - letters, written by award-winning stand-up comedian - you guessed it - Steve Patterson. The host of CBC Radio's The Debaters since 2007, Steve Patterson has become a household name, with more than 700,000 listeners tuning in each week. He has performed at several of the Just for Laughs prestigious televised galas, including one hosted by Steve Martin.  Considered to be the highlight of the show by the audience and critics alike, Patterson's performance prompted the legendary Martin to quip, "If I'd known he was going to be THAT good, I would have cancelled him." Patterson's letters, long a staple of his stand-up comedy routine, address a number of recipients, from real people, to groups, to inanimate objects and concepts.  He airs grievances, offers support or creates just plain confusion in humorous prose. From the political to the personal, from the philosophical to the mundane, no subject - or target - is off limits. Patterson's letters may not change the world, but frankly, it's too early to tell. In these letters, he pleads, begs, cajoles, grovels, and always makes a compelling argument. He would like men to stop wearing Spandex bike shorts. He would like airlines to stop selling seats they don't have. He would like gluten to explain itself. He would like his nine-year-old self to know everything will be all right... Cover design by Julie Scriver. Cover photograph by John Hryniuk Photography. Reproduced by permission of Goose Lane Editions. 1. Language: English. Narrator: Steve Patterson. Audio sample: http://samples.audible.de/bk/adbl/033899/bk_adbl_033899_sample.mp3. Digital audiobook in aax.

Nach Releases auf Great Stuff, Kling Klong, Gruuv, 2020 Vision, Viva Music, Tuning Spork oder Systematic hier das Debut-AlbumnnNach Releases auf Great Stuff, Kling Klong, Gruuv, 2020 Vision, Viva Music, Tuning Spork, Systematic hier das Debut-Album. Hugo & The Prismatics release their first album 'The Consequences of Loop' on Goodvibe Records. The album demonstrates Hugo's desire to lay his emotions on the line, the meeting point between his jazz roots and the groovy years of electronic dance music. The result of 15 years of making and playing music, 'The Consequences of Loop' is Hugo's debut solo album inspired by jazz improvisation, and the idea that our lives are a result of loops. Every action creates a new action. Able to distinguish influences as varies as Matthew Dear and Josh Homme on the record, Hugo's rich and varied sonic history comes to the fore on 'The Consequences of Loop', showcasing a raw and natural talent for combining cross-genre music into one effortless sound, sound you'll be hearing a lot more of in 2013. Available on CD and Digital formats. Escorted by a brand new live show (Hugo & The Prismatics quartet). The album is going to be followed by 2 videos produced by Pitch&Folks ltd in collaboration with Red Gallery London and members of the Unsettled art collective. TRACKS: 1. The Angel 2. Le Mystere 3. Random Jass Act 4. Episode1 5. The Consequences of Loop part1 6. The Vision 7. Fallin 8. The Consequences of Loop part2 9. Mofo Bike Rider 10. The Prism 11. Baby Please Come 12. Chemical Defense 13. Spit it out too